What I Learned About Reaching Out To My Contacts (aka, On Stage with Tom Ferry)

By Cari McGee in Real Estate Career with 2 Comments

So, there are moments in your life when you wish your hair had looked better, or you were wearing something cuter, or you wish you’d lost about fifty pounds in the year before…but this was one of those magical moments when it all came together for me, looks-wise. I liked my outfit, I loved my hair that day, and my make-up was on-point! However, if I’d known I was going to be called up ON STAGE, I would have said something different, probably.

Tom Ferry is a very big deal in real estate coaching circles, and I was lucky enough this summer to win an auction prize of a 30-minute call with him. It turned into a 45-minute call, and we talked about a lot of great things that would be helpful for my business. It was truly a highlight of my business year.

We also made a bet. He challenged me to call people from my database every day and have a real estate conversation with them, then check in with him every night via text. I had to do this for the 35 business days between the call and Summit — a huge event in August with more than 5,000 people attending and tens of thousands of others on the live webcast. If I skipped a day texting him or didn’t call at least ONE person and have a real estate conversation, I’d lose. A thousand dollars was riding on it.

Well, I did it! Sometimes I only got two calls in, sometimes I had more than seven. And the increased business I got as a result was not even the best part.

The last day of the Summit, Tom called out my name and asked me to join him on the stage. (See the video above.) I was more excited than nervous. If you know me well, though, you can see me starting to get a little nervous as the conversation played out. By the end I was back in the game, though, and it was amazing.

Tom asked me what I had learned from the bet, and this is where — if I had been prepared — I would have said more. What I SAID was, “I have the capability. I can change my business single-handedly.” That’s true, but kind of weak.

What I really learned is that connecting with people not only brings you business, it makes you happier, and them happier. Look at this text I sent Tom after one pretty amazing phone call – 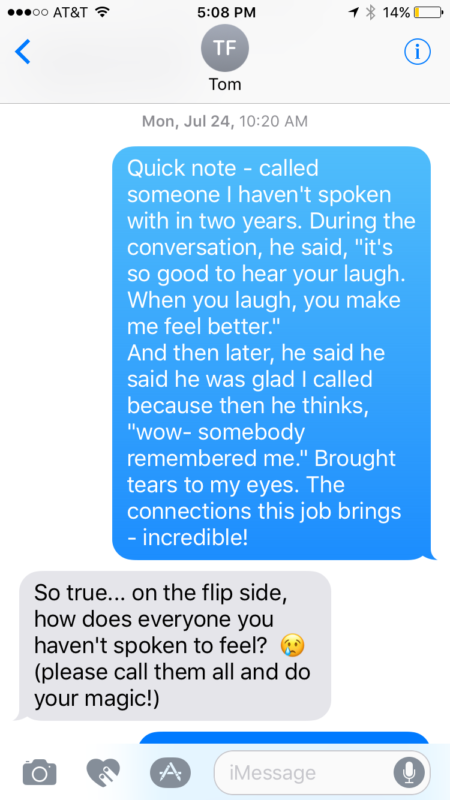 And Tom’s answer is why he’s a freaking genius!

When I came back to work from Vegas, I actually didn’t make my calls for a couple days. You know what? It was AWFUL. Making calls/connecting with my clients had become a habit. And I missed it.

As Aristotle says, “We are what we repeatedly do. Excellence, then, is not an act, but a habit.”