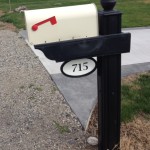 When I used to work at Eddie Bauer, we had a problem with some shoplifters at one point.  The head of the Eddie Bauer Loss Prevention Department, based in Redmond,  got involved and spoke with the local police.  I remember he called me, frustrated, because, “It’s such a small town operation there.  It’s like Mayberry!”

He was peeved by the “small-town-ness” of the Tri-Cities.  When you’re living here, though, that’s a desirable characteristic!

I received a call last week from the mail carrier for the street where the house is located.  She left a message telling me that she had noticed the side door (the one by the mail slot), was open.  She knows no one is living there and knew it needed to be brought to someone’s attention, so she called the name and number on the sign.  How cool is that?

When you are in a nice neighborhood, you have an interest in keeping it that way.  Whether you live there, or pass through on a daily basis. The mail carrier was watching out for the homeowner, the neighborhood, and the Tri-Cities as a whole, actually.

If living in Mayberry is like living in a community where people watch out for one another’s property, personal and real, I’ll take it!

I love living here.  I really do.