Home Is Where the Crowds Are? (Tri-Cities Home Sales Stats, April, 2011)

Let’s jump right in, shall we?

And, take a look at the new home sales in those cities… 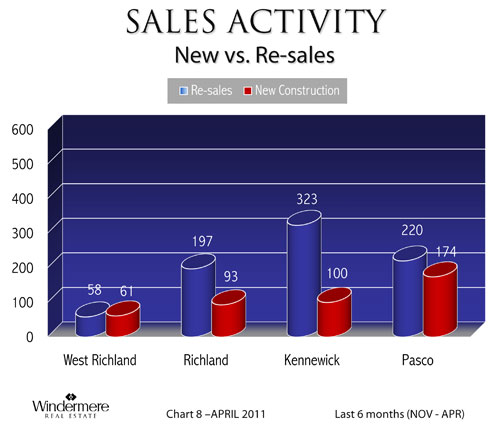 So the homes being built are being sold.  We don’t have a lot of sitting inventory, which is great.  Clearly, the lion’s share of new homes are being built and sold in Pasco.

Does that mean Pasco is full of crowds and back-to-back houses and Richland and Kennewick aren’t??

Pasco still has a lot of land available for development, and Richland and Kennewick have less.  In addition, Pasco is playing “catch-up”, growing out of its agricultural-centered history.  Large housing developments in Pasco are a relatively recent phenomenon. AHO construction built the Sunny Meadows subdivision in the mid-’90s — less than twenty years ago.  Richland and Kennewick have been creating housing tracks since at least the 1940s and 1950s.

Basic point – buy a house where you want to.  We’re still building new construction in each of the Tri-Cities.