By Cari McGee in Buyers with 4 Comments 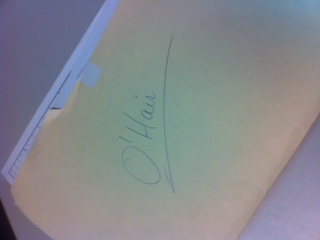 You know how some businesses will keep the first dollar they ever made and frame it?  Usually they display it somewhere near the front door or the cash register, or in the office.  I always thought that was a neat idea, although I’ve never done it.

In real estate, you need to keep client files for seven years, then you can toss all associated paperwork.  My first sale, to the O’Hairs, closed just over seven years ago, in April, 2004.

That means this is my eighth year selling real estate.  I can’t believe it.  When I began, I had no idea how much I would grow to love this business.  It’s so funny – for the period of time that you’re working with a person or a couple to find or sell (or both) a home, it’s an intense relationship.  You talk often, you e-mail late at night, you text at random moments; you’re very connected.  And then suddenly, the sale closes, and these people you spoke with, sometimes everyday, you don’t talk to anymore.  I call about a week later, just to check in, and then over the course of the next couple years I’ll write or call or comment on their Facebook wall, so the relationship doesn’t go away altogether, but it definitely becomes different than it had been.

I pulled out my O’Hair file the other day, preparing to shred everything therein.  I was flooded with memories.  I remember making the appointment to show the home, and then donating blood immediately before I was supposed to leave.  I had skipped lunch that day and for the first time for me, I felt dizzy and light-headed while donating.  Of course, I had to sit and recover, but I didn’t want to be late for my appointment.  I guzzled my juice and threw back my cookies and ran out of the Red Cross to drive to the house (about 20 minutes away from the donor center).  It was raining, I’d never been to the property, I had no idea where I was going…ugh, what a crazy day that was!  I showed up, let the folks in the house, and they loved it (note to all non-Realtors reading this – that is extremely rare…it isn’t very often that someone decides to buy the first house they look at!  It almost never happens, in fact.)!  We scurried around, securing financing and writing my first offer (scary!!!!), then the waiting began.  It was a repossession, so Fannie Mae, a government entity, was the seller.  And we waited, and we waited, and we waited.  Every day, if I hadn’t heard by 3pm, I knew it would be another day until I did hear, because the seller was in Texas, two hours ahead.  The buyer called me every day, if I hadn’t already called him by 3:02.

And finally, in April, it closed.  And I received MY VERY FIRST REAL ESTATE PAYCHECK – for something like $659.17. Woo-freakin’-hoo!  I had jeopardized my life to show a house, and spent countless hours on the phone, for less than seven hundred dollars!!  Note to all non-Realtors reading this – real estate is NOT the path to get rich quick!

I’m having a hard time parting with the O’Hair file.  They were the very first couple to take a chance on me as a Realtor, and all my initial enthusiasms and anxieties and hopes seem to be caught between the cover and back of the folder.  I’d frame it, but it’s a bit too thick.  The people who frame their first dollar take that dollar out of circulation, and they’re okay with that.   I think I’m going to have to be okay with sacrificing some much needed file space in order to hold on to the O’Hair file.  It’s going to be around as reminder for some time to come.