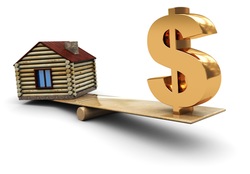 In 2010, I helped a client, we’ll call her Theresa, purchase a house. Last year, she and her boyfriend were able to buy a larger house without having to sell the first house. I did list the first one for a while, priced at $175,000, but eventually she rented it out when an offer was not forthcoming.

Theresa contacted me a couple months ago because the renters were almost at the end of their lease term, and she was thinking about listing it for sale again. I had just sold a house identical to hers, on the same street, for $170,000. I suggested that price and offered to list it for X.X5% (3% to the agency which brings the buyer, X.5% to my agency. That’s a deal I only offer to repeat clients). She said she’d let me know when the house was ready to list , and if indeed she decided to sell when these tenants moved out, or if she wanted to rent it out again.

Yesterday morning I saw her house listed for sale on the MLS, with a different agent from a different agency. My heart sank. Not because of the loss of business, but because I was worried that I’d offended my (now-former) client in some way. I quickly texted her asking if I’d done anything to upset her.

She wrote the following: “Yea. Nothing personal. He just offered 1% and that saves me a lot of money.”

I wrote back that I was relieved and that I was “interested in watching what he does for that 1%. Please let me know how it all goes and if you find a discernible difference for the money.”

She went on to write, “To be honest, he’s definitely not as communicative as you. He does quantity, not quality. So we’ll see how it goes.”

A couple things to note:

The point is, over-priced listings take longer to sell.

I am truly interested to see how long this sale takes, how the closing process goes, and what the final result is for the seller.

Agents are told that there are always going to be clients for whom price is everything. If given a choice, they will ALWAYS choose the least expensive option. Conversely, there are clients who will ALWAYS choose the most expensive option, because the belief that you get what you pay for is a mantra for them. The vast majority of clients fall somewhere between the two extremes. I think Theresa is actually in the middle, and I welcome this opportunity to see how a situation plays out when price becomes the major concern and quality goes by the wayside.