By Cari McGee in Buyers with 2 Comments

My husband, Matt, and I are building our new home. This is the ninth in a series of who-knows-how-many. I’m writing from the perspective of a buyer, and an agent, since I am both in this case. 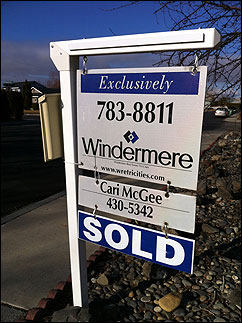 Okay, actually, a buyer offered, we counter-offered, and the buyer accepted our counter offer.  Technically, this means we’re in the escrow period.  We haven’t actually sold the house yet.  However, it’s fun to say, and almost true, so I’m going with it!

This post is about the process of having it on the market, and negotiating the contract.

The stress was overwhelming.  Every morning, I had to check both kids’ bedrooms, the kids’ bathroom, make our bed “just so”, and make sure my makeup and hair paraphernalia was put away in Matt’s and my bathroom.  Matt took care of the family, living and dining rooms, and the kitchen.  Plus, he picked up the dog poop in the backyard.

We were very, very lucky to have plenty of notice for all the showings we had.  I’ve had buyer’s agents call the sellers I’ve represented and say, “I’ll be there in forty minutes.”, when the seller has three kids, a dog and hectic schedules demanding more time.  That’s not cool.

We took the dog with us when we left.  He would have barked incessantly at anyone who showed the house, so we decided it would be best if we removed him from the premises.

I made cookies for every showing I was able to bake them for.  Chocolate chip, mostly, but I made peanut butter for the visit when the buyer came back for a second look.  I spoke with their agent today who said that his client had told him, “Can’t wait to go back to the cookie house!”  Did the cookies help?  Maybe.  They certainly didn’t hurt.  I did a lot of things right.  The house was in great condition, we showed it to its best advantage, and I marketed the heck out of it.

I have to confess, though, that I made a mistake.  I priced my house too high.  I was seduced by the new flooring, the new carpet, the paint, the new counter tops, and saw all kinds of dollar signs in my head.  Just like a doctor isn’t allowed to operate on his or her own family, I shouldn’t have been allowed to price my own house.  I didn’t have the objectivity necessary to position it for maximum impact in the market place.

Our exact same floor plan, on our same street, sold for $175,000 almost two years ago.  However, it was decorated to the nines, had a pergola off the back over the patio, a storage shed in the backyard, and had Corian counter tops in the kitchen.  I thought, “a little bit better than ours in 2010, add two years worth of appreciation, equals the same price as ours now.”  I priced it a touch higher for more room to negotiate (another mistake), and put it on the market at $180,000.

And no one called to show it until a week later.  It was one of the longest weeks of my life.

Finally, just under two weeks later, I had had enough.  Two or three showings in two weeks was not going to get the house sold in time to move into the new one.  So I dropped the price $10,000.  That’s a bit more than 5% off.  The new price was $170,000.  I did that on a Thursday night at 5 pm.  Within 24 hours, we’d had a showing, and appointments for two more showings on Saturday.  One of Saturday’s buyers came back on Sunday, the offer was written on Monday, negotiated, (I’ll tell you the terms after it closes) and signed around on Tuesday.  Finally, my stomach wasn’t in knots any longer.  I could breathe again.

Next up – the home inspection.