By Cari McGee in Buyers with 3 Comments

My husband, Matt, and I are building our new home.  This is the fourth in a series of who-knows-how-many.  I’m writing from the perspective of a buyer, and an agent, since I am both in this case.  If you’d like to catch up, read part one, part two, and part three.

So, the next step in the process was the – fanfare please – PRE-CONSTRUCTION MEETING.

This is where Matt and I, and the other agents (George and Karren), and the designer (Vicki Kangas), the builder (Les Savitch), and the building supervisor (Tim Kangas), all got together and hammered out every last detail possible. 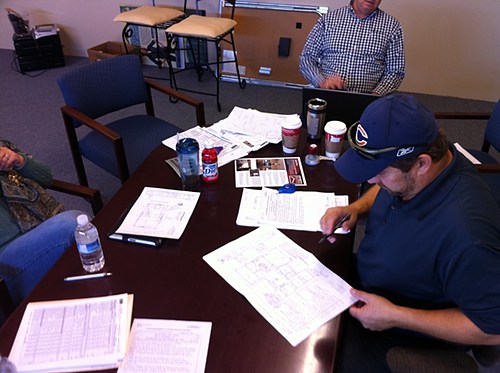 This took a long time.  Like with the meeting at Colortile, I can see how it could have gone even longer.  However, Matt and I had spent a great deal of time discussing what we wanted, beforehand.  Despite that, certain subjects did arise that we hadn’t considered, and so we had to make some decisions without a ton of thought.  For instance – we changed our kitchen island counter top to slab granite, which necessitated it being shortened by two feet.  We already knew that it would be shorter, but we had to decide, quickly, whether we wanted the island to be shortened by two feet at one end, or by one foot at each end.  Of course, it’s not a huge deal, but we had to decide right away, which added some stress to the proceedings.

We also decided where the fence would be (Matt put it farther back than I would have liked, but apparently I picked granite he doesn’t like, so life is about compromise, right? 😉 ), we extended some concrete, making our patio area larger, and changed the door leading out of our bedroom to the patio area from a slider to an actual door.  Matt placed the bookshelves in his office, we placed all our light fixtures, and discussed what paint would be painted on which walls, exterior and interior.  For a detail-oriented guy like Matt, this was the perfect meeting.  He is confident nothing was overlooked.

Remember back in part 1, when I said I knew the price we arrived at the day we wrote the purchase and sale would not be the final price?  Unfortunately, I was right.  We had a price the first day, then added more at the design meeting at Colortile, and then added even more at the Pre-Con meeting.  Our total price for our new house is approximately $25,000 more than it was that first day.  The vast majority of the cost was taken up in flooring upgrades (going from vinyl to tile throughout was a big expenditure).

At the Pre-Con, Matt slipped me a note, “Are we pricing ourselves out of ever re-selling?”  GREAT question, Matt.  I’d like to say I’m rubbing off on him, but it’s probably his dad’s influence, as he is a Realtor, too, so he grew up with profit-and-loss talk around the dinner table.

My answer was no, because the things we were doing are not terribly individualized.  When we do go to re-sell (hopefully not for ten to fifteen years), the things we added now will be things that we enjoyed and received worth from, and things that will please the next owner.  The “more power” electrical system, the sink in the laundry room, the slider-to-actual door changes, are all completely reasonable upgrades that any owner will appreciate, be it us, or the people who buy the house from us or subsequent owners years in the future.

And that’s where we’re at so far.  Matt is torturing himself by driving by the site EVERY DAY, to see if they’ve started work on it.  Which they haven’t, and he sends me texts, “Why haven’t they started yet? Has the deal fallen through?”  Heavy sigh.  He might be my toughest client yet!