This is the first (of I have no idea how many) in a series I’m going to write about building our new house.

Some things you should know up front – we are not the builder. (Thank Heaven! Neither Matt nor I possesses the skill-set necessary to build a house!)

We are using a production builder, who is customizing an existing floor plan for us.  Here’s the difference – a custom builder will use your floor plan, and do whatever you want them to do.  A production builder uses only certain floor plans that he or she has built thousands of times before, and only works within certain parameters.  For example, I would like a tankless hot water system.  The builder we chose doesn’t install those, so it’s not something I can have in my new house.

We chose our builder, Oasis, because they are the only one building in the area we wanted to live. We wanted to stay in West Richland, and we wanted a view.  We were able to get both in the subdivision where Oasis is building.

Fortunately, Oasis has a good reputation, and the listing agents we’re working with, Karren and George Garton, know their stuff.  No matter how much we want a new house (and believe me, we want one!), if the builder had been sub-par, we wouldn’t have gone forward. 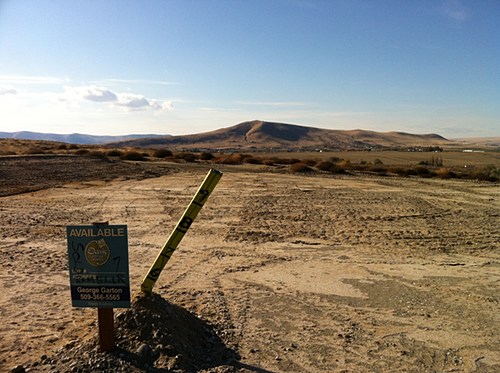 We sort of feel like this is a meant-to-be sort of thing.  The lot we wound up choosing had become available just thirty minutes before we got there.  In fact, we drove over with a different lot in mind.  However, while we were walking down to view another floor plan than that of the model, Matt paused on a lot and asked Karren, “Which lot is this?”  “Seven,” she replied.  “It just became available a half-hour ago.”

Well, it was all over for Matt but the shouting.  My husband is a sucker for a good view.

We found the floor plan we liked, then began planning and pricing.  Karren told us we needed to be pre-approved through their preferred lender.  We didn’t have to use him, we just needed to be pre-approved through him.  His name is David Austin, and I’ve worked with David before.  In fact, I was currently working with him, as he was handling the loan for some clients of mine.  My husband wanted to work with the lender that had done our re-fi. His name is Dan Melior. However, we applied online with David that night, anyway.

Armed with our pre-approval, off we went back to the model home the next day, and over the course of a couple hours, we hammered out an offer.  I don’t know how it is in other areas (I’ve heard it can be very different elsewhere), but here, when you buy a new house, the builder gets what they ask for, in terms of price.  It’s very straight-forward.  If this upgrade costs $938, the buyer pays that amount.  So, that’s what we did.  Added all the upgrades we wanted on top of the base price, and boom – came up with the final price of our house.  I know it actually won’t be final – we will encounter further costs as we go along.  I know we’re going to want to upgrade floor coverings and counter tops, for example.

So, we’re very excited and that’s a good thing.  We’re going to need that excitement to carry us through the tough parts of getting our existing home ready for the market. (Ugh!)  And that’s what I’ll tackle in part 2.