Are Home Prices Going Down Due to the Coronavirus Pandemic?

It’s one of the most important questions we hear, and both buyers and sellers are wondering: Will the ongoing coronavirus pandemic cause home prices to decline?

If you need to buy a home right now, a price drop would be welcome news — especially after so many years of Tri-Cities home prices going up. Even at the national level, CoreLogic predicted back in January that home prices would go up this year in all 50 states.

If you need to sell a home now, you obviously don’t want prices to drop. At least not too much.

We certainly don’t claim to know the future, and with the pandemic causing so many changes on a weekly basis, it would be foolhardy to try to make any predictions. But what we can do is share information to help you understand what’s happening to home prices right now both here in the Tri-Cities and around the country. Ready?

Later this week, we’ll dive into the latest Tri-Cities housing stats for April and see how prices compare to the previous few months, how they compare to a year ago, etc. We’ve done some quick number-crunching already, and it looks like the median home price in April will come in at around $310,000. If so, that will be down from the record high of $317,000 a month earlier … but it’s a negligible drop. For comparison, the median price was $299,900 two months ago.

On an anecdotal level, we put two homes on the market this past Thursday night. Both are already under contract — one sold at full asking price, and the other sold above asking price. Just a week earlier, we listed and sold a home in Prosser and it also went under contract with a full-price offer.

Here are several data points that give some indication of what’s happening around the country:

That’s a lot of evidence suggesting that home prices aren’t going down because of the pandemic.

A Recession’s Impact on Home Prices

I’ve used this graphic in a previous post, and I want to mention it here, too. The national economy is either already in, or heading toward a recession. It would be easy to assume that means home prices will drop. But history suggests otherwise. Of the past five recessions, the only one that had a significant negative impact on home prices was in 2008 — and that recession was caused by the housing market. 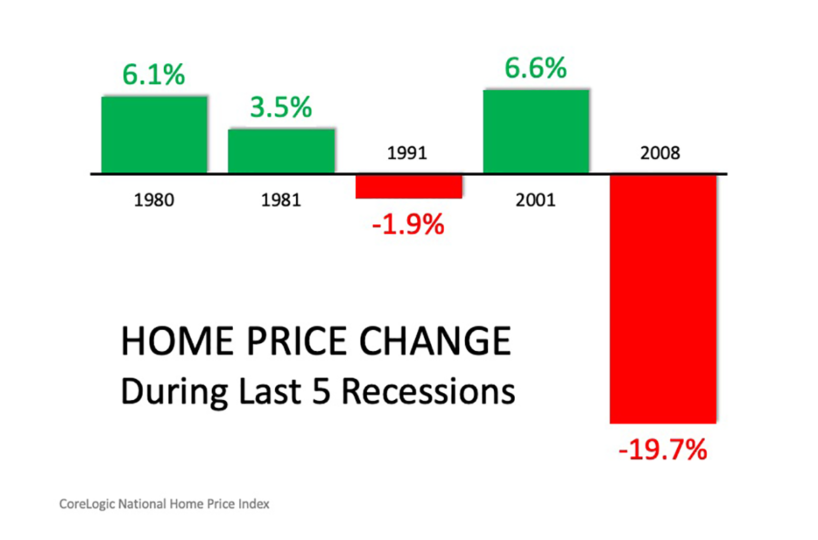 In three of those five recessions, home prices actually went up.

As I said above, it’s unwise to make any predictions right now on how this is going to play out over the coming months. But right now there’s a lot of evidence that the coronavirus pandemic may be causing an economic recession, but it doesn’t necessarily mean home prices are going to go way down, too.

As always, we suggest you rely on the expertise of your Realtor — ask what’s going on in your city/neighborhood and, whether you’re buying or selling, make an informed decision that’s right for you.

If you don’t have a Realtor you can turn to for information and help, feel free to reach out to our team at any time.