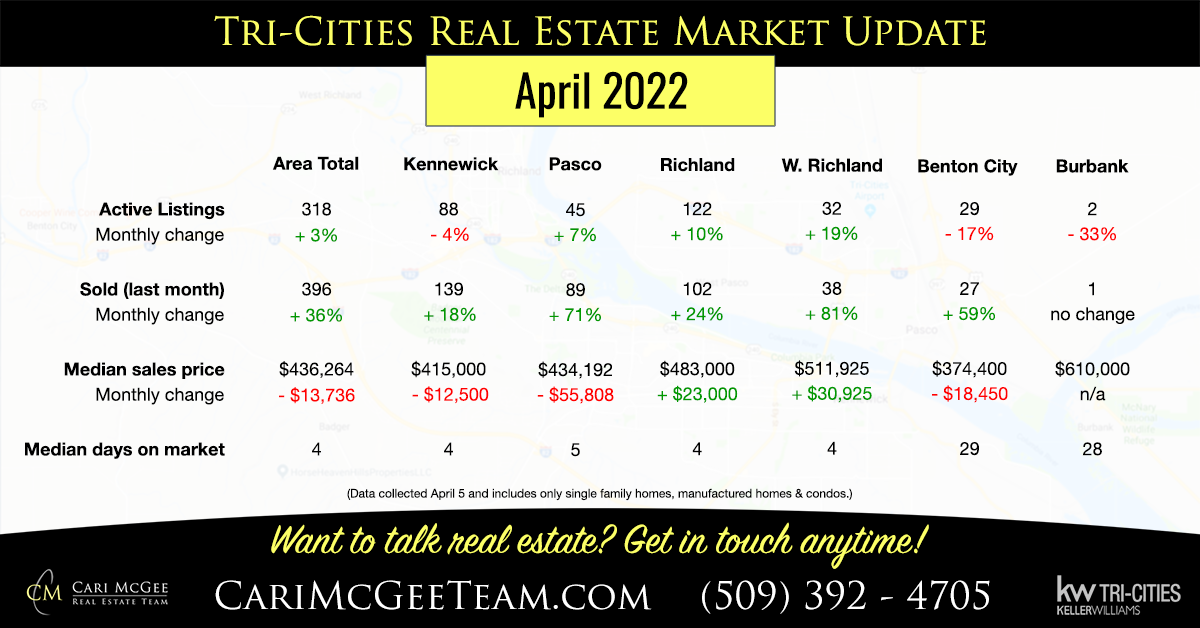 It could be worse…much worse. That’s the phrase that comes to mind as I look over our latest housing market update. After setting a new record last month, Tri-Cities home prices dropped a bit while the number of available homes held steady. The latter even went up just a tiny bit for the second straight month. These aren’t signs of a big change or anything like that, but as I’ll explain below…it could be much worse.

The number of available homes rose again last month, but just a tiny bit. It’s risen for two straight months, in fact. Inventory during our February snapshot was 309 homes, then 310 last month, and now 318 when we ran numbers on Tuesday (April 5). It’s nothing to get super excited about, but consider this: Last year, inventory declined by 38% between February and April. Let’s be thankful that’s not happening right now.

The lack of inventory is still a big problem in the lower price ranges. In Pasco, for example, as of Tuesday there were only three homes on the market that were priced below $400K. Same story in West Richland. If you’re in that price range, Kennewick and Richland are your best bet with 22 and 10 available homes, respectively.

After last month’s record median of $450,000, prices dropped this month to a little more than $436K. That’s thanks to Kennewick and Pasco, which both saw prices go down (in the two cities where the majority of homes sold last month). This breaks a string of four straight months with rising home prices. So again, it could be worse.

That’s not all. Take a look at West Richland’s median. See that “5” at the beginning? This is the first time we’ve seen a $500K or above median price anywhere in the Tri-Cities. And West Richland hit that mark in a month with 38 homes sold — higher than normal. When we looked on Tuesday, only five of the 32 available homes in West Richland were priced below $400K. And those 32 homes had a median asking price of $599,900, so it won’t be surprising to see the median there set another record this month…or at least stay above $500K.

As always, please drop us a note if you ever have questions about the housing market here in the Tri-Cities, or even in your specific neighborhood/town/city.

(*Remember that days on market can sometimes be skewed by how new construction homes are processed in the MLS.)